Yesterday, it took  place the first activity from the EQUALITY PLAN which is about
STOP BULLYING.

Carmen Vega, who is a teacher from La Rosaleda and the Coordinator of the Plan, prepared all these things:

At 10:45 A.M. all the students went to the main corridor of the principal building and several videos were played.


Afterwards the students went to a table where they could write a message on a piece of wood TO SAY NO TO BULLYING. 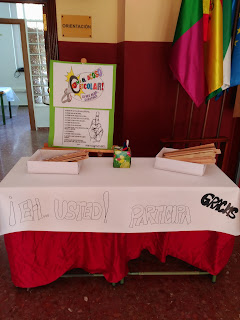 I wanted my students from the Second course of the Bilingual Vocational Training course could participate in it but in class. So the students would put into practice some specific Marketing techniques as if they were doing a marketing campaign for the EQUALITY PLAN.
My idea was to integrate the PLAN into the activities of the subject they are studying right now.

First of all, they had to think of the idea they wanted to communicate: a short, deep and direct message to stop bullying that must be aimed at young people like them.

On the second hand they should write it into Spanish and then translate it into English. They were allowed to use their own mobile phones.

We have to thank Nataly for her invaluable help as she revised all the texts. Nataly is a member of the class too and a English native speaker.

Finally, using their own materials, imagination and creativity they had to write it down on a paper the best way they could. Here you have the final result. 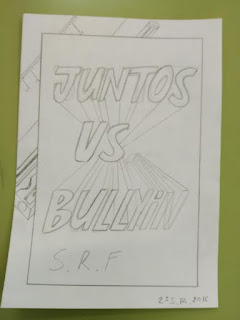